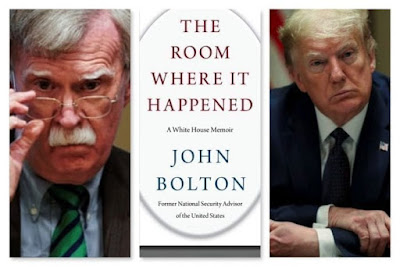 To say Donald Trump is not pleased with the John Bolton book release is an understatement.The US President,Trump reacted to the release of John Bolton's new memoir on Tuesday by calling him a “washed up Creepster,'' and added that his former national security adviser should be “in jail” for allegedly including classified information from his time at the White House in his new bombshell book.


It is always a giggle when Trump is giving a taste of his own medicine.Bolton has really gotten under his skin with this book release.The more Trump throws a tantrum,the more he makes this book attractive to the buying public.I for one,am very curious now and can't wait to get my hands on it.
“Washed up Creepster John Bolton is a lowlife who should be in jail, money seized, for disseminating, for profit, highly Classified information,” Trump tweeted on Tuesday. “Remember what they did to the young submarine sailor, but did nothing to Crooked Hillary. I ended up pardoning him - It wasn’t fair!”

Trump's tweet comes as Bolton’s new memoir, “The Room Where It Happened,” hits bookshelves Tuesday, after Bolton's publishers won a legal battle between the White House and the former national security adviser.

The Justice Department and National Security Council had sought a court injunction and a temporary restraining order to prevent the release of the book saying that it contained classified information and that Bolton had deliberately bypassed the necessary classification review process that he had agreed to.

But federal judge on Saturday allowed the book to be released despite concerns it contains classified information, but blasted Bolton for having “gambled” with national security.

Bolton’s team meanwhile claimed that Trump is just trying to prevent embarrassing information about Trump’s conduct from getting to the public.
"We are grateful that the Court has vindicated the strong First Amendment protections against censorship and prior restraint of publication," Adam Rothberg, Simon & Schuster's senior vice president of corporate communications, said in a statement.
"We are very pleased that the public will now have the opportunity to read Ambassador Bolton’s account of his time as National Security Advisor.”