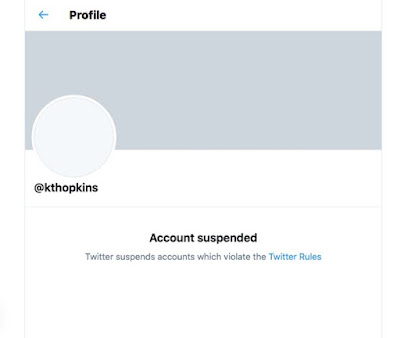 Katie Hopkins has been permanently banned from twitter.She had her account suspended permanently after a petition signed by over 70,000 people.Earlier this week Katie Hopkins and Marcus Rashford free school meals was a trending topic after she called out the footballer.

Recently, Hopkins had attacked the Black lives matter movement among others.
She also had a pop at Marcus Rashford after he secured a 6 week school free meal funding for school children.Hopkins had contacted him on twitter saying,why doesn't he feed them himself as she has no
interest in feeding other people's children.She also remarked that they should not have had children they couldn't feed.
She had then tried to play off Manchester City against their rivals Manchester United,who Rashford obviously plays for,by saying she looks good in Blue.Manchester City's official twitter account quickly disassociated theirselves from her ,by replying,"not in our blue"they then congratulated Rashford.
Going on to prove,some things are bigger than sports.Obviously this is a thing Katie is yet to learn.I wonder why she does all these things,is it for the attention or she just has a split personality? 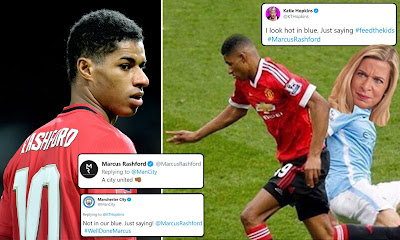 The  Change.Org petition that got her banned on tweeter had read in its bio: "Unbelievably, Katie Hopkins has been given a platform to insult, abuse and cause outrage for far too long. Attacking victims of Child Sex Exploitation is possibly the most disgusting act that any human can do.

"Does she have no boundaries? The scary thing is, this could happen to her own children right under her nose - being as self obsessed as she Is, how would she see the signs?"I think it's about time Twitter took action and removed her from their platform, just as Facebook have done with Britain First.
"Freedom of speech is something I believe in. Freedom of hate speech isn't, I'm sure many people feel the same way."
The media personality and former columnist has gained a large amount of backlash and hate over the years for the messages she sends out on the social media platform and her devisive ways.