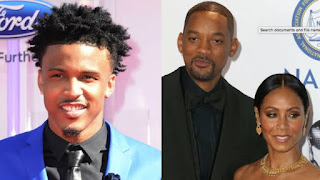 Jada Pinkett Smith and August Alsina,took the word entanglement to another planet after the revelation of their affair,which supposed to have happened with the blessings of Will Smith,Jada's husband.August has now reacted at last and admitted the relationship was indeed an entanglement.
Jada's Red table talk with husband Will Smith,where she admitted to the affair,went super viral and was one of the most talked about events on social media.The word entanglement was also introduced to popular culture,with it going viral and becoming a meme of its own.


August had been quiet for a while,after he initially made the affair public.He didn't react to Jada and Will's Red table talk,but he has now given his version of that event.
Jada repeatedly used the word entanglement to define what was going on between them, as Will pushed for her to be more specific. She confirmed it was a relationship, one that happened while she and Will were on a break and on the brink of divorce.

Alsina was the one who first made the relationship public by speaking about it with Angela Yee on The Breakfast Club and then when his claims made headlines, the Smiths decided to address them head-on.

While August claims he hasn't watched the complete episode, he has now reacted to Jada calling their relationship an "entanglement."
In a new interview with Vulture, Alsina said;

"I don’t know why that word is such an issue. I would agree,"
"If you look up the definition of 'entanglement,' it is a complex and difficult relationship. It was exactly that. I think it's just the language that probably stuck out to people. But I definitely have to agree with it being an entanglement. It definitely was something complicated, a complicated dynamic."

He explained he spoke out in the first place because "a lot of chatter" about the situation was already out there and he was starting to get a reputation as "this problematic guy who was super reckless, like I'm pushing up on someone's wife."

"I didn't really like that. I didn't like the sound of that, especially when it wasn't the truth," he continued, saying that the perception also "started to f--k with my partnerships and business relationships and money."

"I didn't like how that started to tamper with my life and finances," he added. "I felt it necessary to get it out off of my spirit and clear the air."

Alsina says he doesn't "have an issue with anybody." now the story is out in the public space.
He added, "I love everybody. I love all of them. They've been my family, and there's a lot of history there."
He also revealed he didn't have regrets about the relationship because of what he learned about himself through it.

"[It] helped me to operate and access my higher self," he said. "I don't regret it at all because I know that on this planet, there is not much harmony, and there is not much love, so when you’re actually given love, real love that you’ve never experienced, it is a gift."