Why i think Tolulope Arotile was murdered

Why i think Tolulope Arotile was murdered 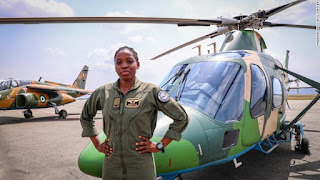 The death of Tolulope Arotile,Nigeria's first female combat pilot just doesn't make sense to me.The 25 year old ,was said to have died after an old classmate had seen her at the NAF airport base in Kaduna,the classmate who had the driven past Tolulope,reversed and killed her in a freakish accident!

This sounds like total crap to me.Now,let's break it down.How far could this old classmate have driven before he realised that he had seen Tolulope?100 yards?200 yards?3?I mean,imagine yourself if you drive past someone that you then notice,how far would you have driven?Not too far definitely.

So lets assume he sees her,i don't know for sure if its a he or a she,but lets just assume its a he,so he sees her and reverses,how fast would he be reversing to have knocked her down that badly to kill her?
And where was she?Was she standing in the middle of the road?Was she on the side pavement?Did this guy use his rare view mirror or was he just reversing?
There has been accidents like this before,but they usually involved little kids,the drivers couldn't see them and they were out of view,cos they obviously were not tall enough.
But this is not the case in Tolulope Arotile's case,this was a full grown woman.She is also a trained young woman in the combat force.She is trained to be aware of her environment.So i cannot imagine she was standing in the middle of the road absent minded.She would have been careful and aware of her environs.

Now,i would like to see the steps the Nigerian government will take on this matter.This person who was driving should have his phone records checked.They should also check his last destination and have it confirmed.In fact,they should retrace his steps for the last week or two.Why?I will tell you why.

I read an interview where her father,Mr Akintunde Arotile,had said he had just spoken to his daughter (who was his 4th child)on the phone at around 1pm o the day she was killed.And 4 hours later she was dead.He revealed he called her on the phone on Tuesday July 14, at about 1:00pm on her return from an operation against bandits in Katsina State, and by 5pm, he was informed that she had died and was in the mortuary.
This is why i said the driver should be investigated.For her to have been on duties such as being involved in fighting bandits,shows she was involved in some dangerous operations.
It is very easy for those she is helping to defeat to say,as a pilot she plays a very important part or played a very important part in thwarting their operation.So we are going to get rid of her.This happens a lot in places like Colombia and Italy in the heavy days of the Mafia.

Only after this old classmate is investigated thoroughly and exonerated can we come to a conclusion that this was an accident.For me personally,i think she was stopped because of her duties.The whole thing just does not make sense.

Add this to the theory that the Fulani terrorists murdered Arotile in order to abruptly end her promising upward mobility career with the NAF and she was taken out for her audacity to conduct successful combat missions against Boko Haram.Then you see this is not an open and shut case.
I watched her father in his interview and it totally broke my heart,to see a grown man like that reduced to a mess.If you have kids at all,you will know very well that the remote thought of losing them sends a shiver down your spine.When its a daughter who has died such a violent death,its even worse.
I pray and hope the Nigerian government do the right thing and investigate the death of Tolulope Arotile,its the lease she and her family deserve,after serving her nation so diligently.


The Nigerian Air Force in tribute had described Arotile's death as an "irreparable loss".The agency said it was in "deep sorrow" as the young pilot contributed significantly to combat operations against insecurity in northern states. 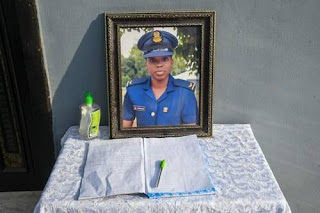 In what could be termed as a short Tolulope Arotile biography,her father revealed- "She has not just been brilliant but wonderful. She did all her Education from kindergarten to nursery at the Air Force base and Nigeria Defence Academy, Kaduna. One day, when she was very small, she pointed to one small aircraft packed on the field and said one day she was going to fly that aircraft, and I said Amen.

So, from that day she started working towards getting admission into the Nigerian Defence Academy Kaduna. She had a degree in Mathematics and became an Air Force Cadet. From there, she was sent on several courses abroad and became a pilot. I thank God that she was able to achieve her dreams as a baby before her death" he said
May her soul rest in peace.
Tags Nigeria nigeria air force Nigerian news
Previous Post Next Post