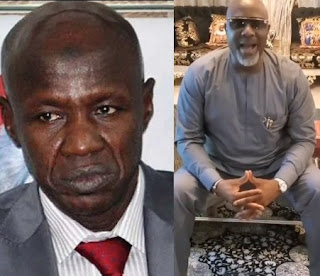 Dino Melaye's singing a song for suspended and arrested EFCC boss,Ibrahim Magu,is the latest song the Senator has entertained Nigerians with.Dino's singing for Magu mind you,is not a complimentary one.It is to mock the arrested EFCC boss on suspicious corruption activities.
Dino Melaye's latest song,as the others was funny and this particular one talks about how a
man should be careful when all seem to be rosy,cos vengeance is always around the corner.Suggesting that Magu is paying for his atrocities.Melaye then went on to sing about how he warned President Buhari,that many corrupt men were in his government,but he failed to see.

I am sure Magu who was earlier today, suspended by the presidency to allow him face the probe into the allegations of corruption leveled against him by the Minister of Justice and Attorney General of the Federation, Abubakar Malami,will not be amused at all when he hears this.
Listen to Dino Melaye's latest singing below...