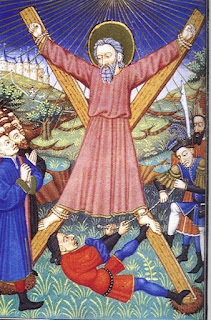 St Andrews day facts:Scotland marks St Andrew's Day on Monday 30th November,it will be cecebrated with a bank holiday and festivities across the country.

Did you know that St Andrew is also the patron saint of Greece, Russia, Italy’s

Amalfi and Barbados? As well as other countries, he's the patront saint of singers, spinsters, maidens, fishmongers, fishermen, women wanting to be mothers, gout and sore throats. St Andrew is also the patron saint of the Order of the Thistle, one of the highest ranks of chivalry in the world, second only to the Order of the Garter. 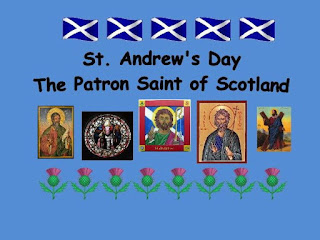 He actualy asked for this cross, cos he felt he was not worthy to die on the same kind of cross Jesus died on. St Andrew was crucified on 30 November 60AD, by order of the Roman governor Aegeas in Greece.This incidence is represented by the white cross on the Scottish flag, the Saltire, since at least 1385.

Legend has it that some body parts of St andrew was preserved.Part of the relics of reportedly are, a tooth, kneecap, arm and finger bone,. 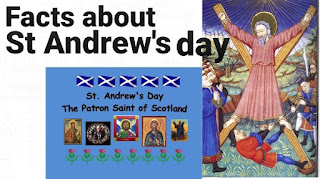 This meant St he became a popular medieval pilgrimage site up until the 16th century - when they were destroyed in the Scottish Reformation. In 1870, the Archbishop of Amalfi sent an apparent piece of the saint's shoulder blade to Scotland, where it has since been stored in St Mary's Cathedral in Edinburgh.

St Andrew was born in Bethsaida, in Galilee, which is now Israel. His remains were moved 300 years after his death to Constantinople, now Istanbul, by the Emperor Constantine. While he was generally revered in Scotland from around 1,000 AD, he didn't become its official patron saint until the signing of the Declaration of Arbroath in 1320.