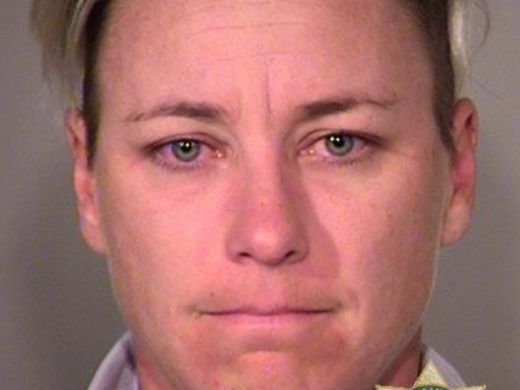 Retired U.S. women’s soccer playerwas arrested early Sunday morning by police in , and charged with driving under the influence, according to booking information from the Multnomah County Sheriff's Office.
Wambach, 35, was released on her own recognizance and charged with misdemeanor DUII (driving under the influence of intoxicants).
According to a release from the Portland police department, Wambach was driving
a 2014 Range Rover and was stopped at 11:05 p.m. Saturday after failing to stop for a red light. A sergeant observed signs that she was under the influence of alcohol. Wambach failed field sobriety tests and was arrested. She later failed a breath test at the Central Precinct in downtown Portland. She was polite and cooperative throughout the investigation, police said.Wambach posted an apology on her Facebook page Sunday.

"Those that know me, know that I have always demanded excellence from myself. I have let myself and others down. I take full responsibility for my actions," the statement said.
"This is all on me. I promise that I will do whatever it takes to ensure that my horrible mistake is never repeated. I am so sorry to my family, friends, fans and those that look to follow a better example."
Wambach retired from the  last year after the Americans won the . She is the USA's all-time leading scorer with 184 goals in 255 national team appearances.
In Canada last year, Wambach played on her fourth World Cup team. She won Olympic gold medals in 2012 and 2004. In 2012 she was selected FIFA Women's World Player of the Year, becoming the second American to win the honor after Mia Hamm. She had 27 goals and eight assists that year and scored in the first five matches of the London Olympics.
Her final game with the U.S. women's national team came Dec. 16 in New Orleans against China. "I love this team, this country, and it has been my pleasure and my honor to represent you all, the fans, for as long as I’ve been able to," Wambach said after the 1-0 loss that drew more than 30,000 fans.
Last Wednesday Wambach played in a pro-am with Caitlyn Jenner in Rancho Mirage, Calif., before the ANA Inspiration.
Abby Wambach net worth is said to be in the region of $4m. The 32 year old 5 foot 10 inches tall soccer player, was born in Rochester, New York, Abby began playing in the girl's youth soccer league, but so dominated scoring, averaging nine goals a game, that she was moved to the boy's league.
Tags People Sports
Previous Post Next Post