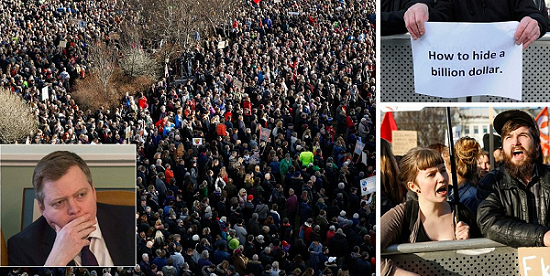 The crowd gathered in Reykjavic (pictured, main) to pile the pressure on Sigmundur David Gunnlaugsson  to resign after opposition parties called for a vote of no confidence earlier today.

It comes after the Panama Papers claim to reveal that he and his wife used offshore company, Wintris Inc., in the British Virgin Islands to hide millions in bank bonds when Iceland's banking system crashed and its lenders had to be bailed out. He came to power off the back of anger over the meltdown, and resisted calls from foreign creditors to pay back money they had lost due to the meltdown on the basis it could ruin Icelandic banks and the value of bonds.
It has now emerged that his secret company Wintris held substantial bonds, which many believe is a clear conflict of interests. The crowd today held placards, with messages such as 'How to hide a billion dollars', and simply 'Prime Minister Resign', in what was the biggest public protest since the 2008 crisis on which he rose to power.