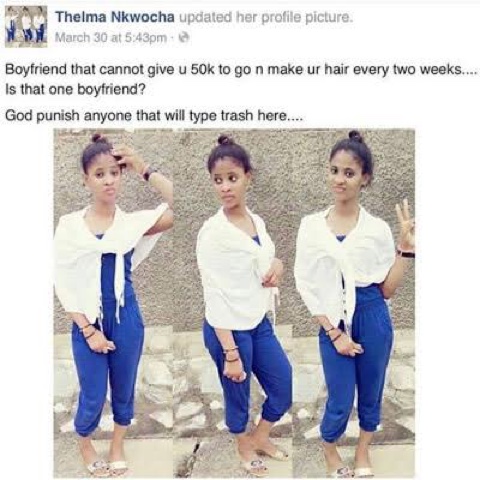 Nigerian girl Thelma Nkwocha wants 50k to do her hair from boyfriend.You didn't read that wrong,that was exactly what a young Nigerian girl wanted from her boyfriend,and not for a month or 2,that is every 2 weeks!
The Facebook user named, Thelma Nkwocha got everyone talking on her post that went viral on social media.Sh was all over Facebook,Instagram and Twitter.Her actual post read:


“Boyfriend that cannot give u 50k to go n make ur hair every two weeks…. Is that one boyfriend? God punish anyone that will type trash. Now the funny thing is she has now retracted the post saying she was joking.But i don't believe that,i think she was shocked by the amount of attention and abuse she got,so she is trying to backtrack.The fact that she ended the post with God punish anyone that talks trash meant she was serious.The  post from Thelma Nkwocha just shows what is wrong with society today.That girl is probably 20-22 years old,and already she has that kind of mentality,imagine what kind of guys she would attract.Those who will use and dump her.Cos how many guys of her age range can afford to give a girl 50,000 Naira to do her hair every two weeks?
Tags Nigeria Entertainment News People
Previous Post Next Post