Aruna Quadri is the new Table Tennis Olympics star.The table tennis player is trending on Youtube,his equipment is under scrutiny by fans and budding ping pong players and Aruna Quadri world ranking is sure to shoot sky high after his impressive Olympic show.He became the first African table tennis player to qualify for the quarter finals in an Olympics tournament.
In an impressive show,he beat the highly rated German player Timo Boll 4-2.
In a thrilling Fourth Round match up against the influential German, the 2014 ITTF Star Player left no one in doubt of his readiness to progress into the next round when he took the first three sets 12-10, 12-10 and 11-5 to lead 3-0.

But sadly Aruna lost to the world No 1,the Chinese player Ma Long.It was just
unfortunate that he had to play the No 1 so soon..with a bit of luck,he would have met Ma Long in the finals or semi finals.
The Nigerian Sports Minister Barr. Solomon Dalung took to his Facebook page to share photos of himself and Table Tennis star. Aruna also turned 28 yesterday.

'Congratulations to our table tennis star Aruna Quadri on his 28th birthday marked at the Riocentro Pavilion yesterday. Though he lost to the World's best table tennis player Ma Long, Quadri made history by becoming the first African to come this far. We are so proud of him. He was the man of the day. It took more 45 minutes to get him out of the venue as fans thronged in their numbers to take photographs and autographs of him. A day to remember! God bless Nigeria.'

More photos after the cut. 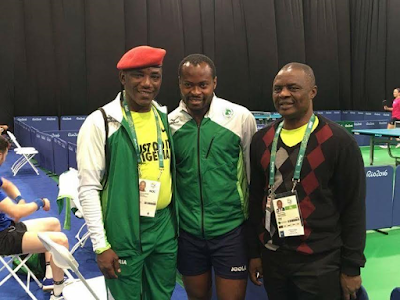 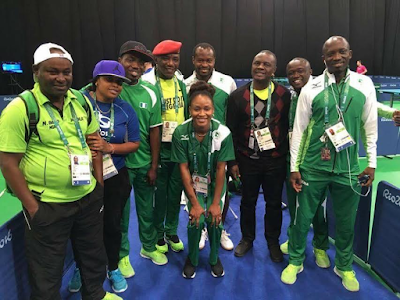