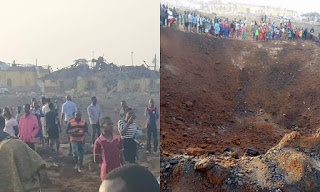 What happened in Akure today was a loud blast causing panic and hot news amongst the citizen of the area.
Some feared it to be an asteroid.But alas,it wasn't.Once again people's carelessness and failure of the government to have stringent
measures has cost Nigerians terribly.
The cause of the Akure blast or explosion,was as a result of a vehicle in a convoy that was taking some explosives to a storage facility in a neighboring state.Can you just imagine that?

As many as 50 houses and buildings were destroyed as a result.The blast cut the popular and busy Akure Owo road into two.Among the destroyed buildings were churches,schools and places of business.
A lot of people were injured as well.
The people who lived nearby and even very far away were on social media very early today asking what had happened because they heard the loud explosion!

Many of them thought it was an asteroid because they could hear it miles away and their buildings literally shook!
Governor Rotimi Akeredolu has since addressed the situation by sending out messages on twitter explaining what actually happened.He has also since visited the scene of the blast.As of the time of this report,no casualties had been established.
Tags nigeria news
Previous Post Next Post