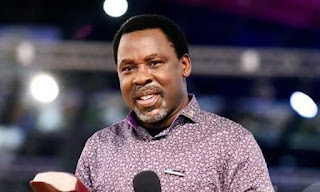 TB Joshua coronavirus prophecy,has caused a stir among Nigerians.The controversial self style man of God is famous for his predictions which often are debatable.This time it has to do with the pandemic which has left the whole world a shaken and
confused place.
Joshua had predicted in his church that by the 27th of March,which is today by the way,will be the day the corona virus ends and disappears.
He also went on to say it will disappear the same way it came."The showers of rain will come to wipe away all fears"
He also had a message for President Trump of America,saying the flight ban imposed on Europe will have a massive backlash on the economy.
He had a message for China as well,saying the rain and cleansing will start from there.
To be fair though,in his new year message,he did say there will be an epidemic that will take over the world.
He said,medicine or no medicine,it shall come to an end on the 27th of March.If it was not medicine that brought it to the world,medicine cannot take it out.
I wonder what he thinks brought it to the world though.
Watch the video and see below..