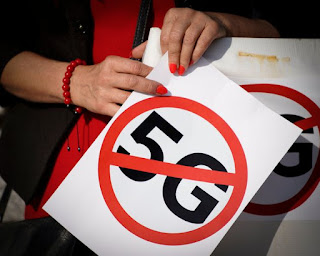 Ever since the first case of the covid 19 virus there have been multiple speculations on how it was a ploy engineered by top countries like the US and China to control
the minds of the people, it has been said that China most especially wants the power hence the spread of the virus that would put the world at their feet.

The most ridiculous of all these claims and conspiracy theory is the recent one of a claim that the virus was doctored to put the world under lockdown so the 5G chip could be implanted into brains, to not just control but to hold information of the masses.

These conspiracy theory has gone beyond speculations as people have begun calling out Broadband engineers and burning down telephone masts, it may seem that the world is on edge with this virus and people are looking for who to blame and pour their anger on and the 5G theory may seem a valid option.
You can rest assure we haven't heard the last of this.The speculation will grow well into the future,and just as you have people claiming Michael Jackson is not dead and Elvis is alive,so you shall hear plots aboyt covid 19 well into the future.
Now i do believe radiation is dangerous and that if we are exposed to it especially at close quarters,it could be very very dangerous.
But what i refuse to believe is that 5G is anyway linked to the virus.They are two separate things entirely.
Tags news
Previous Post Next Post