Soldiers who rioted in Warri Delta during corona lockdown

Soldiers who rioted in Warri Delta during corona lockdown 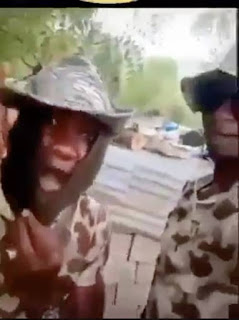 Case of the Nigerian soldiers who rioted in Warri during the covid 19 lockdown,highlights how bad security has become in Nigeria.
A few days ago an army official shot a man that breached the lockdown to go get
medications for his pregnant fiancee in Warri, Delta state. Due to the anger of the people, they lynched the army official which resulted in his death.

Earlier today a video went viral, in it army officials were threatening to go rape women in Warri to avenge the death of their colleague, the bravery  which they had to conveniently make such threats on social media when their duty is to protect the citizens and not to instill more fear in the already scared masses.

As of now the army officials in question have been arrested, the Nigerian army tweeted that they have been arrested and will be dealt with but like every case of the military and the people we can only pray and hope justice will be carried out.
Tags Nigerian news
Previous Post Next Post