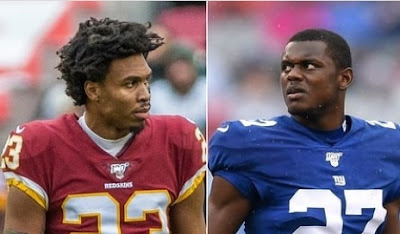 New York Giants cornerback Deandre Baker and Seattle Seahawks cornerback Quinton Dunbar who were each charged with four counts of armed robbery with a firearm on Thursday have turned themselves in to the police.
This just doesn't make sense to me at all and if true,these two must be the most stupid men in America!
Baker has a $10m contract,he also received more that $5m as signing on fees,Dunbar on the other hand is entering the last year of his contract and would receive almost $4m in
2020 alone.He will sign a bigger deal next season,at least he was meant to anyway.

So with all these and a future so bright that they need to wear shades to face it,why would you get yourself involved in something so stupid?Over a game of cards?
Just get your Lamborghini keys and leave! Didn't these fools learn from OJ Simpson?Why are these boys so stupid?I'm sorry bout this,but i am so angry,when people get a chance that millions dream off and toss everything away like sand on a beach. 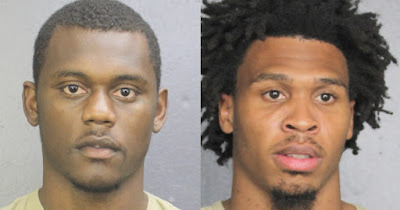 I hope for their sake i am wrong about this,cos this would be the biggest waste of a life if this leads to a conviction.
Now back to the story.

Miramar Police said in a tweet on Saturday night about the two fugitives:
"Confirming that Deandre Baker and Quinton Dunbar have both turned themselves in (at the Broward County jail). No additional information will be provided at this time,"
The players allegedly robbed guests at a Maimi party at gunpoint and left with thousands of dollars in cash and wristwatches worth tens of thousands of dollars, according to arrest warrants issued by the Miramar Police Department.

Baker, Dunbar, and a third man then left in high-priced cars (a Lamborghini, a Mercedes-Benz and a BMW), the arrest warrants said.

According to CBS Miami, one witness told police "attendees were playing cards, video games and gambling" when an argument broke out involving Baker. Baker flipped the table they were playing cards at and pulled out a gun, the witness said.

Law enforcement disclosed that the men made out with more than $7,000 in cash -- along with several valuable watches including an $18,000 Rolex watch, a $25,000 Hublot, and a pricey Audemars Piguet timepiece.

In addition to the armed robbery charges, Baker has also been charged with four counts of aggravated assault with a firearm.

Baker was a first-round draft pick for the Giants in 2019. Dunbar signed with the Washington Redskins as an undrafted free agent in 2015. He was traded to the Seahawks in March. Both men are from Miami.
Tags American football Entertainment news Sports
Previous Post Next Post