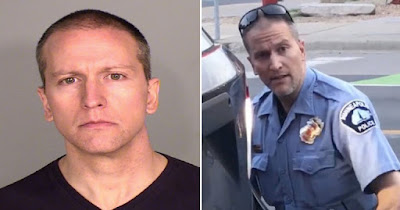 The officer held for the death of George Floyd,Derek Chauvin,(watch video)has had his bail set for $500,000 according to the criminal complaint filed in the 4th Judicial District Court of Minnesota.
This has caused an outcry on social media with the slogan NO BAIL FOR A MURDERER trending.Another trending slogan is HE KNEW WHAT HE WAS DOING,in reference to Chauvin being charged for 3rd degree murder and not 1st degree like many think he should be. According to the document, there have been no conditions set for his release.
The document doesn't indicate that Chauvin is out on bail, but it does say that if he does bond out, bail is set for $500,000.
The order of detention box is not checked because Chauvin was not ordered detained or remanded.
Tags america news racism
Previous Post Next Post