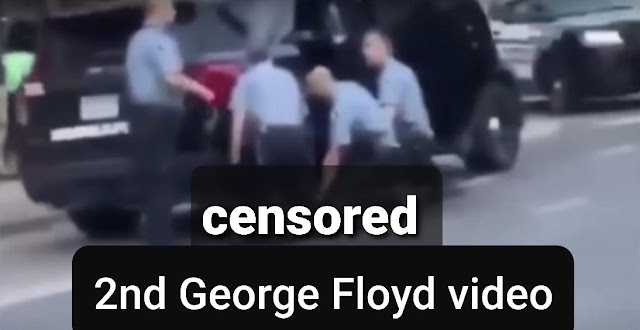 The George Floyd video is worse than first thought as a new video has emerged,showing three Minneapolis police officer kneeling on him before he stopped breathing.You could also hear him groaning and begging to stand up.

Recall, a previous video(see that here) posted by eyewitness Darnella Frazier showed Floyd, 46, being knelt on by one officer, Derek Chauvin, who has now been arrested and charged with George Floyd's murder.

In this new video that just emerged, which was captured from the other side of the Minneapolis police vehicle where the arrest occurred, Chauvin and two other white officers were filmed kneeling on Floyd.

Chauvin was taken into custody on Friday afternoon, according to the Minnesota Department of Public Safety. He faces charges of third-degree murder and manslaughter, according to Hennepin County Attorney Mike Freeman.Many have protested over this ,as they feel he should be charged with 1st degree murder,because they felt he knew what he was doing.

The three other officers were fired in connection to Floyd's death, but they are yet to be arrested or charged.Watch the new and second George Floyd video below.

Watch the video below.