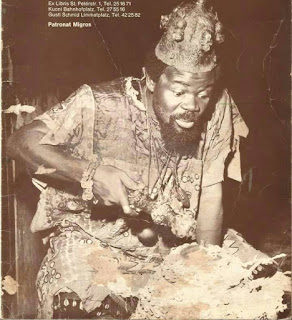 Duro Ladipo biography:His death shook the Nigerian entertainment industry.As a child,Duro Ladipo's picture alone was enough to scare me when i saw those eyes.His songs and theatric displays were like no other and his wife had the most beautiful voice and stage presence.A recently discovered documentary/biography, brought his genius back to life.


He was one of the pioneers of theatre in Nigeria and founding fathers of the industry we have come to know and love today.Duro was born December 18, 1931, in Osogbo, Osun State, his father was a reverend in the Anglican Church and he grew up in the church environment.

The recently discovered documentary titled, “The Creative Person” by the American National Educational Television (NET), Duro Ladipo revealed why he was named Duro which means ‘Stay’.It also showed us a side of the man many had not previously seen.
For example,i never knew he was so articulate,was surprised to see he was a chain smoker.Also very playful with his children.Speaking about his background,the man popularly known as Sango said-

“My parents had a lot of troubles having children, 13 children were born dead before me, that is why I was named Duro which means stay don’t go again

“Since I was born, I heard it that none of my brothers and sisters ever died again, we are all living now, about seven of us. My father has just one wife, that’s my mother.”
Growing up in the church environment and his grandfather’s background as a renowned traditionalist would later influence Duro’s work as a dramatist, playwright and musicologist.

He revolutionized church music with the introduction of native drums and he explained the motive behind his action. 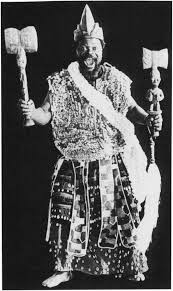 He said: “I was very interested in music since I was seven years old because I was one of the boys directing the choir for my father in the churches, I was allowed to use my own sense in bringing the choir up. Then I felt changing from the monotonous tune of the piano that was just sounding the same every time we gather to worship.
“I introduced native drums to church music abruptly one Sunday and everybody was shocked.”

Against the will of his father who was never in support of traditionalists, Duro would sneak out of the vicarage to watch masquerades and traditional festivals in town.

He left Osogbo for Ibadan where he worked as a teacher and later got the partnership that gave his passion a huge fillip. While in Ibadan, in 1960 he met Prof Ulli Beier, a German writer, scholar and a lecturer at the University of Ibadan who arrived Nigeria in 1950 with his estranged wife Susanne Wenger. Beier developed interest in traditional Yoruba culture and arts which led him to support Duro in full-time play writing and stage production.

In 1962, Duro Ladipo and Beier co-founded the ‘Mbari Mbayo’ group in Osogbo, converting his father’s house into an art gallery and a theatre, where he produced his plays.

His theatre group was renowned for promoting and reevaluating the significance of the Yoruba tradition and culture. His major works include Oba Moro, Oba Koso, Ajagun Nla and Eda which starred veteran Nollywood actor Lere Paimo and earned him the Eda Onileola sobriquet.

Duro Ladipo and his theatre group travelled across cities in Southwest Nigeria for stage plays, theatre drama and also went international with their art showcasing their works in Europe and America and he revealed that his crew members were not just doing what they love without reward.

“I started my theatre on a salary basis, I was one of those who started this in Nigeria because I felt people should be tied to a particular profession. We do everything together, I feed them and at the end of the month, we shared profit,” Duro Ladipo said.

His second wife, Chief (Mrs.) Abiodun Duro Ladipo, alias ‘Moremi’, also played significant roles in his plays. In Oba Koso, regarded as one of his most prolific performances, he played the lead role as Sango, the god of thunder. He was so close to reality in his delivery of the role that he was assumed to be a second Sango. Events on the the day of his death, March 11, 1978, – unusual heavy rain with heavy thunderstorms gave this believe some level of credence among his fans

Duro wrote and produced 36 plays, published 10 plays, produced 9 gramophone records and acted in four films. He was conferred with two national and three international awards, which included the first prize at the Berlin Arts Festival in Germany in 1964 and at the first-ever Commonwealth Arts Festival in London, UK, the following year, with his epic play, “Oba Koso” (the king did not hang).

He had three wives – Mabel, Abiodun and Bisi and he explained in the documentary that Mabel who was the first wife took care of the children at home, while the other two go along with him on tour. Abiodun played lead roles in his plays.

“My second wife who is the greatest star I have is Abiodun, she plays the lead role every time because she has wonderful voice, she is just talented with voice, she sings wonderfully and she is a very serious actress. The third is Bisi Idowu, very talented and one of the best dancers I have,” he said.

On Wednesday, 11th March, this year, it will be exactly 42 years the iconic actor died.

Veteran Nollywood actors like Lere Paimo aka Eda Onile Ola, Kareem Adepoju (Baba Wande) are some of the prominent actors who passed through the Duro Ladipo Theatre Group.

His second wife and children Wole Duro-Ladipo and Solabomi Duro-Ladipo Akinsola, have been carrying on with his legacy.

I hope someday,a befitting film will be produced to tell the story of our greats,we have so many of them.But sadly our industry are not equipped for so many reasons to tell these great stories.Some for unavoidable reasons,and some due to laziness and lack of talent.Will we ever see a Ladipo or Ogunde again?
Time will tell.