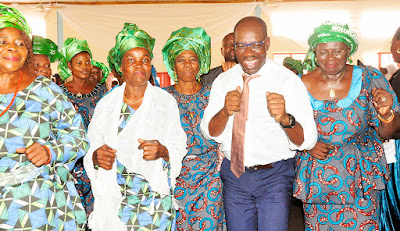 So Edo market women are contributing money to buy the 22.5 million naira APC nomination form to enable the governor have a second tenure.Its the most stupid thing i have heard in years!
Ahead of the September 19 gubernatorial election in Edo state, women from all walks of life are endorsing the incumbent Governor of the ruling party in Edo state, His Excellency Godwin Obaseki for a second tenure in office.
So,this man has enough money on his own to buy this form,he has enough backers,and yet
these women,who have many of their members struggling to feed their family feel they should give millions to a man who is far richer than them right?

There are so many schools in Edo state,where there are no chairs,leaking roofs for the students and no chairs to seat.These women don'ts see it fit to address this,but Obaseki is who they should be helping?
Sometimes i wonder whether there is madness in the water we drink in Nigeria,cos i just don't get it.Declaring their support for the governor of Edo State in separate press conferences, Market women from the eighteen Local Government Areas of Edo State, a coalition of Professional Women, female teachers from across the eighteen LGAs, Female leaders and members of the All Progressives Congress and Female political office holders all said they are contributing their quota towards the purchase of the 22.5 million naira APC nomination form to enable the governor have a second tenure.  Leader of the market women association in the state, Madam Blacky Ogiamen, who disclosed this on Wednesday in Benin City while speaking to journalists, after a meeting of the leadership of market women associates from the 18 local government areas of the state said Obaseki has performed more than they expected.She said: "We want to appreciate Governor Godwin Obaseki, for the job well-done. Before he came into power, our former Governor, Comrade Adams Oshiomhole, as the patron of the market women then, told us categorically that if we give our support to Obaseki as Governor, that he will do a lot of projects, of which Obaseki is doing now. "We are solidly behind him; we are ready to support him for another four years. We will contribute our widow's mite to buy his form so that he will complete his two tenure as Governor of Edo state."Explaining why they decided to join forces to ensure the re-election bid of Obaseki, Ogiamen said Obaseki has performed beyond what former Governor Adams Oshiomhole promised them while introducing him to market women.She said that Obaseki has not in any way disappointed his predecessor, Adams Oshiomhole and since he did not disappoint Oshiomhole, God will not disappoint him. "He is not a noise maker, he is a man of peace. We will support him to win Edo state for APC," she declared.Meanwhile at a meeting called at the instance of the State Organising Secretary of the All Progressives Congress in Edo State, Dr Mrs Aisosa Amadasun, the APC Woman Leaders from the eighteen LGAs in Edo State and female political office holders also endorsed Governor Godwin Obaseki for a second term in office.The State Organising Secretary of the Party, Dr Aisosa Amadasun said they represent the interest of all women in the APC in Edo State as well as that of the over 460 female political appointees whom the governor had appointed into office since the inception of his government over three years ago.The Acting State Woman Leader, Mrs. Maimuna Momodu in her address said that women had never had it this good in Edo State and that like Oliver Twist they want more, and this can only be possible if Governor Godwin Obaseki is given a second tenure.Also a coalition of Women Professionals among them leaders and members of the Federation of Women Lawyers (FIDA), Association of Private School Proprietors, Association of Female Pharmacists, Association of Women Engineers, National Association of Women Journalists NAWOJ, female leaders of the NLC and the TUC in the State, and members of the Idia College Old Students Association addressed a press conference in which they threw their weight behind Governor Obaseki’s second term bid.Spokesperson the Coalition, Reverend Mrs. Helen Atekha Odemwingie said they have decided not to be left out in determining who becomes the next governor of Edo State. She said “we stand up this morning to endorse our Governor Godwin Obaseki and his Deputy Philip Shaibu, we are women and we have feeling and this passion in us for every child, we see him as our own. You see the way he has been honouring us, we have decided to contribute to the purchase of his ticket.  However representatives of female teachers of the State Universal Basic Education Board (SUBEB) from across the eighteen Local Government Areas, staged a presentation for the governor in which they declared their support for his re-election bid.Dressed specially for the occasion, bearing A4 size papers indicating each local government represented, the teachers said “on behalf of the extraordinary, 11,000 trained, digital and dynamic teachers of the eighteen local Government areas of Edo State, we like to affirm our support for our amiable and dependable, able and diligent, innovative and trust worthy, dynamic and forward thinking, Governor Godwin Nogheghase Obaseki, the wake and see Governor for a second term. As you stand out to represent our people, we the female teachers of Edo state are solidly behind you. Go forward!!!