Orji Kalu will go back to jail-Efcc latest news

Orji Kalu will go back to jail-Efcc latest news 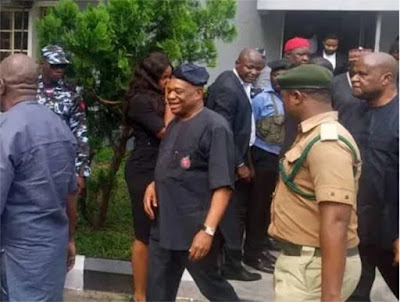 The EFCC has promised to send Orji Uzor Kalu back to jail in a latest news update,as they feel the evidence they have on the 60 year old with a net worth of $330 m, is overwhelming!


They described the judgement of the Supreme court nullifying the 12-year conviction of former Abia state governor, as unfortunate and a technical ambush against his trial.

The antigraft agency had dragged Kalu and one Ude Udeogo, before the Federal High
Court in Lagos over allegation of diverting N7.6 billion belonging to the Abia state government during Kalu's time in office. Udeogo was Kalu's Director of Finance and Accounts while in office.Kalu and Udeogo were on December 5th 2019 found guilty and sentenced to 12 and 10 years imprisonment respectively.

Reacting to the nullification of the order by the Supreme court, EFCC in a statement said the corruption charges against Kalu subsist and it will begin fresh trial of the former governor and Udeogo.
A statement from the anti corruption agency further said-The corruption charges against Kalu still subsist because the Supreme Court did not acquit him of them. The entire prosecutorial machinery of the EFCC would be launched in a fresh trial where justice is bound to be served in due course.
Kalu is the chairman of SLOK Holding and the Daily Sun and New Telegraph newspapers in Nigeria, he served as the Governor of Abia State, Nigeria from May 29, 1999, to May 29, 2007. 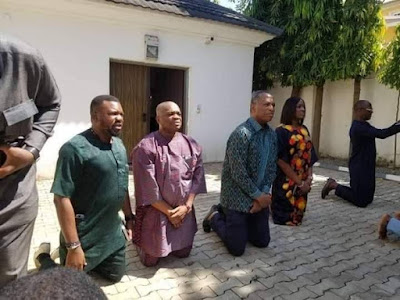 The ex governor trended not too long ago when a picture of him kneeling down surfaced.The reports claimed he was begging President Buhari for pardon after he was convicted.But other reports followed that this was just a rumour by mischief makers and the picture was in fact taken at his home on November 24, when he was joined by Onyeama and others to celebrate the Christ the King feast, an event marked annual by the Catholic Church.
It was a funny story though,who makes up all these gists?I guess the news will be a lot more boring if we don't have occasional entertainments as such.