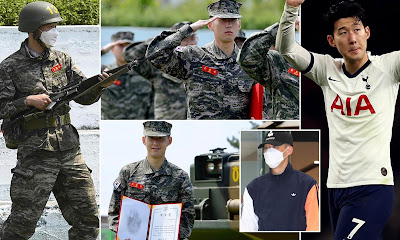 Son Heung-min military training service, has concluded and the Tottenham Hotspurs' compulsory three-weeks military training in South Korea amid, ended with distinction.
Son enrolled for the programme on April 20 following the suspension of the Premier League in the UK over the Coronavirus pandemic.
The 27-year-old footballer finished as one of only five individuals to receive an award at the
Marine Corps' training camp graduation ceremony on the southern island of Jeju, and his graduation ceremony was held Friday on morning local time; but it was closed to the public.

Asides finishing as one of the top candidates in the class of 157 persons, he also achieved a perfect record in shooting. 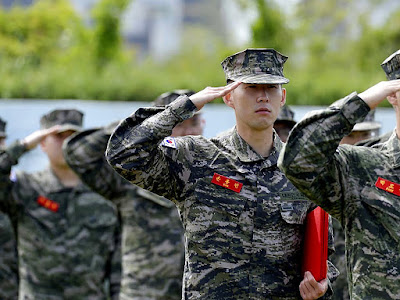 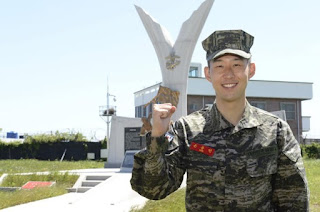 Son is not married due to the advice of his father who asked him not to take a wife till he retires.He also agrees with his dad-“My father says this and I agree, as well,” Son says. “When you marry, the number one will be family, wife and kids, and then football. I want to make sure that while I play at the top level, football can be number one. You don’t know how long you can play at the top level. When you retire, or when you are 33 or 34, you can still have a long life with your family.

He dates though and once dated Korean pop stars Bang Min-ah and Yoo So-young.
The footballer was fulfilling requirements of the military service exemption he earned by winning the gold medal for South Korea in the soccer tournament at the Asian Games in 2018.

Without the exemption, he would have been required by law to serve 21 months in the military, making up the bulk of Seoul’s 600,000-strong forces.
Though Son will be returning to London this month, he still has community service obligations to finish by 2023 to complete all military duties.