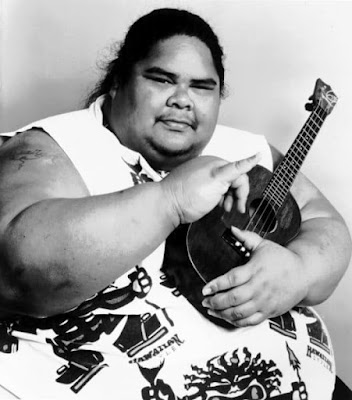 Who is Israel Kamakawiwo'ole?He was a famous Hawaiian who became famous internationally after the release of his Facing Future,album in 1993.His medley of ‘Somewhere Over the Rainbow/What a Wonderful World’ cemented his fame when it featured on numerous TV programmes, commercials and films.

Kamakawiwo'ole with Louis Kauakahi, Sam Gray,Jerome Koko,along with his brother Skippy,formed the Makaha Sons of Niʻihau,the band had a style that blended traditional and contemporary styles.Their hard work and touring continued to gain popularity as they toured
Hawaii and the United States.

The Makaha Sons of Niʻihau released 15 successful albums.Kamakawiwoʻole was determined to stay true to his roots and represent the real traditional Hawaiian music,as he believed this had not been properly represented to the outside world.

Kamakawiwoʻole’s first solo album Ka ʻAnoʻi, was released in 1990, which won awards for Contemporary Album of the Year and Male Vocalist of the Year from the Hawaiʻi Academy of Recording Arts (HARA). 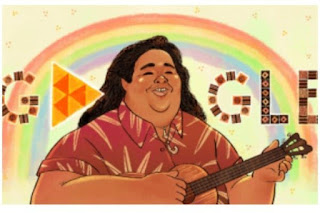 But the best was yet to come.The album Facing Future was then released in 1993,it  featured a version of his most popular song, the medley ‘Somewhere Over the Rainbow/What a Wonderful World’.

The album went on to become Hawaii's version of Thriller as it  became Hawaii's first certified platinum album and sold more than a million CDs in the United States.

It is the best-selling Hawaiian album of all time.

How did Israel Kaʻanoʻi Kamakawiwoʻole die?
Kamakawiwoʻole died on 26 June 1997 at the age of 38, from numerous health problems,as he had been visibly very overweight,at a point,he weighed 750 pounds and had been obese most of his life.His cause of death was respiratory failure.
His brother Skippy died young too, at the age of 28 in 1982 of a heart attack.
He was on the day of his burial honoured with the Hawaiin flag flying at half-staff on 10 July.


A crowd of 10,000 people attended the funeral, with thousands of fans later gathering as his ashes were scattered into the Pacific Ocean at Mākua Beach on 12 July.
He was honoured with a Google doodle,on the 20th May 2020,on what was his posthumous 61st birthday.
He got married to Marlene in 1982.He is survived by his wife and only child,a daughter Ceslie-Ann "Wehi.
Tags celebrity Entertainment music
Previous Post Next Post