Why Burna boy was arrested by police(video)

Why Burna boy was arrested by police(video) 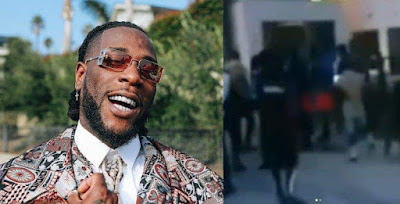 Burna Boy arrested by police after noise from his house complaints by neighbours,was the trending news over the weekend.The gist was that Burna had become a law unto himself and always disturbing with his activities.

His father was allegedly also arrested in the incident.No i am guessing his father opted to go along as no right thinking father will leave their kids to the Nigerian police in this day and age.We hear all sorts of stories,so the dad probably went along to see that his son is safe.
While watching the video of the arrest,you can hear commentary in the background.Acouple of interesting ones stood out.

The first was that of a man saying Burna was too much and had no respect or regard for others.He said they had influential people and celebrities like Odion Ighalo,but they composed themselves and are not a nuisance to the neighbourhood.
Another observation was a man saying Burna was yet to pay the full money for the land he built his house on,and that he was owing 100 million Naira.Now my question is,how did he know this?Did those who sold the land call him to tell him that?

From his voice,you could tell he was not a person who could afford a house in that area.He sounded like a very young man who was just a passer by.

But controversy just seems not far away from the self styled African Giant lately.From him calling out Davido only a day before this arrest,to previous online ranting about how he was too real for Nigerians and how nobody helped him or paved the way to the top for him.
All these make you ask the question,is Burna Boy getting too big for his boots?