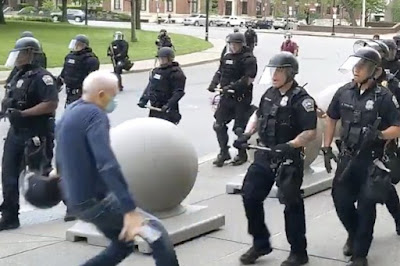 Old man pushed by Buffalo police: A whole unit consisting of 57 Buffalo Police Department,has resigned from their assignments on Friday after two officers were suspended over a video,showing officers shoving a 75-year-old man to the ground,leaving him bleeding.

I find this really incredible that these men have taken this action.I mean,where is there decency?Ok,the man was not overly pushed,but he should not have been pushed at all,the officer could just have talked to the old man and usher him to the side,but he pushed the man in the chest,making him stumble back and having a nasty fall.

Now for me,that was not even the worst part,the worst part was that they left this man on the floor,despite seeing him bleeding.One officer was about to check on him,but he was stopped from doing so.
The question is,if that was their father or grand father,would they have pushed him like that or at worse,see him bleeding from the ear on the floor and leave him?

America is really becoming a scary place to be.If they can do this to a 75 year old man,what hope does the rest of us have? 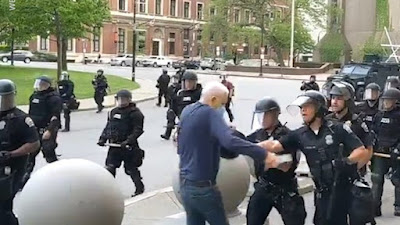 "Our position is these officers were simply following orders from Deputy Police Commissioner Joseph Gramaglia to clear the square," said Buffalo Police Benevolent Association President John Evans. "It doesn't specify clear the square of men, 50 and under or 15 to 40. They were simply doing their job. I don't know how much contact was made. He did slip in my estimation. He fell backwards."
The man who was pushed to the ground was recovering in a hospital.
The officer's actions quickly drew condemnation from around the state, including Gov. Andrew Cuomo who said the "incident is wholly unjustified and utterly disgraceful."
During a press briefing Friday, Cuomo played video of the incident, watching it wide-eyed before questioning the officers’ actions.
“You see that video and it disturbs your basic sense of decency and humanity,” Cuomo said.
“Why? Why? Why was that necessary? Where was the threat? It was an older gentleman. Where was the threat? And then you just walk by the person when you see blood coming from his head,” he said, describing the scene.
Cuomo also urged the mayor and district attorney in Buffalo to investigate the incident and move expeditiously towards potentially bringing criminal charges against and firing the officers involved.
Something really has to be done,this incidents are getting too much,nobody feels safe anymore,especially black people,but this old man was a white man,i guess it's a matter of ,if you march for them or support them,you are one of them.
Tags america fp news usa
Previous Post Next Post