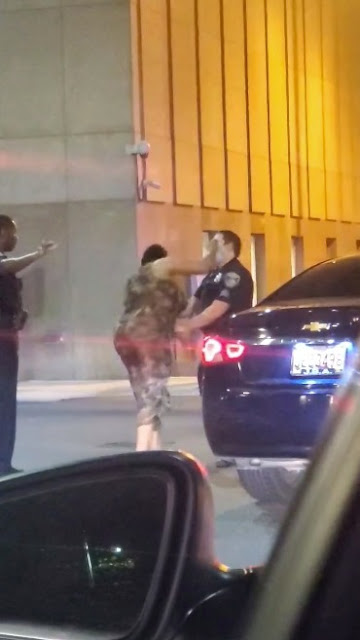 A Baltimore police officer has been suspended after he was seen in a video, punching a black woman and knocking her out after she punched a fellow officer,a white sergeant twice in the head in Baltimore,Maryland on Friday night, 29th May.

The police department said on Saturday that Commissioner Michael Harrison has also ordered an investigation of the incident.

In the video shared online, the black woman can be seen confronting a white police sergeant in a downtown intersection. When the sergeant grabs the woman’s arm, she smacked the Sergent twice on his head before his black colleague threw a punch — sending the woman straight to the ground.

Police said the woman was taken into custody and transported to a hospital for treatment after the incident.

On Saturday police said the woman was released from the hospital and taken to Central Booking for processing.

According to several reports, extra officers were on duty in the city on Friday night in response to protests over the death of George Floyd in Minneapolis, but there was no indication that the woman was a protester herself.

Baltimore Mayor Bernard 'Jack' Young issued a statement over the weekend praising the first officer for his restraint but calling the punch 'deeply disturbing.'

He said: "The video circulating online of a woman assaulting a police officer, seconds before a separate officer approaches her and strikes her, with what appears to be his closed fist, is deeply disturbing and is under investigation.

"I have spoken with Commissioner Michael Harrison and the officer who struck the woman has been removed from police duties. I've also asked Commissioner Harrison to relay a simple message to his command staff and to officers from across the city: sound, constitutional policing is the only acceptable way we're going to do things here in Baltimore under my watch.

"I believe the first officer, who was struck multiple times by the woman, showed remarkable restraint by not retaliating as he was being assaulted. The woman should have been placed under arrest and not assaulted. Our system of justice does not involve the concept of an 'eye for an eye.'

"The level of violence on our streets remains consistently high and we need to continue to stay focused on driving down violent crime and preserving life.

"We're working to build the best police department in the country and we don't have room for error."

Police Commissioner Michael Harrison also released a statement, saying: "I saw a video regarding an altercation between a woman and members of the Baltimore Police Department. I saw that video and I saw what transpired in that video. I ordered an immediate investigation into that incident," Harrison said. "The officer has been removed from his assignment and (is) on administrative duties until the outcome of that investigation. So we wanted to make sure that we did swift and decisive action to make sure that we are not just accountable, but transparent during this time."

Harrison said there are two investigations underway, first, what was seen in the video, and, second, the woman's individual case. She was taken to a hospital and is facing charges. Her name or charges weren't released.