US president Donald Trump was trending with hashtags #BunkerBabyTrump and #BunkerDon on Monday.But do you know why the President took solace in the white house bunker?
According to the New York Times, Trump told aides that he's concerned about his safety as the White House went dark after it turned off its lights in a rare move Sunday night while protests and riots continued a few hundred yards away from the residence.


It was reported,Trump was holding talks with his Attorney General, Bill Barr, law enforcement officials and Governors on Monday while hidden in his secret bunker in the White House as violent protests continued in cities all over the country in the wake of George Floyd's death. 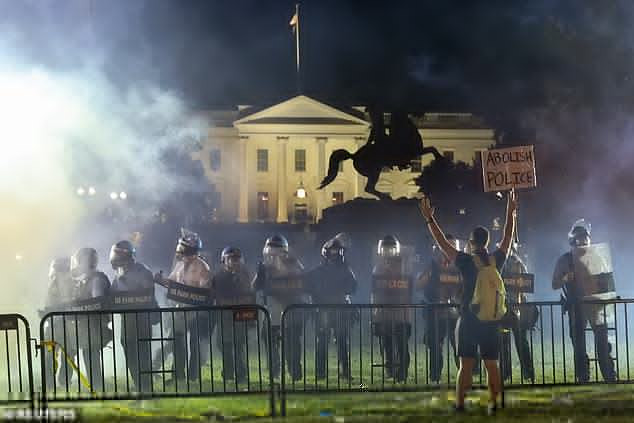 According to various reports from US media houses, Attorney General Bill Barr had a meeting with the president Monday morning,while Trump is scheduled to host a video conference with governors, law enforcement leaders and US national security officials in the Situation Room to discuss ways to keep American communities safe amid the protests that have erupted following Floyd's killing at the hands of a policeman.

Through out the weekend rioters attacked, damaged and looted US businesses, malls and even burnt a church in Washington D.C, while cars were burnt, streets set on fire, windows of local stores smashed, leading to clashes between protesters and law enforcement after State Governors invoked the National Guard to curb the protests.
Trump, being protected by the Secret Service reportedly had to flee to the secure secret White House bunker as protesters surrounded the White House on Sunday. Protesters set an American flag on fire at Lafayette Park in front of the White House as they rallied against police brutality on Sunday evening, and were hit with tear gas by law enforcement who wanted to disperse them as they advanced to the White House.
In another twist, more than 50 Secret Service agents were injured in clashes with protesters in the nation's capital on Sunday night, as more than 4,100 people were arrested across the country over the weekend during riots in 145 cities.
Trump's advisers have reportedly discussed the prospect of an Oval Office address in an attempt to ease tensions but Trump reportedly dismissed it for lack of policy proposals, putting the mantle in the hands of Governors and Mayors in affected countries.Meanwhile Governors and mayors have said they support rioters' right to gather, but want an an end to the violence and destruction in their cities. The violence ensued after George Floyd, a 46-year-old black man, was killed while in a white police officer's custody in Minneapolis on Memorial Day.
Tags america news Politics usa
Previous Post Next Post