The Rashard Brooks shooting and killing at an Atlanta Wendys drive through,by police officer,Garrett Rolfe,has once again highlighted the treatment of black people in America,as seen in the video,from police officers.Brooks fallen asleep in his car at the Wendy drive through prior to his death.

It has since been announced that the white officer Rolfe, who shot and killed Brooks,has since had his appointment terminated.The Atlanta city police chief,Erika Shields,has also resigned in the aftermath of the Wendys shooting.This was announced by the Mayor of Atlanta,Keisha Lance Bottoms,on Saturday.

The shooting surveillance video, left many in the city once again incensed by the death of another black man at the hands of the police — and nervous about the potential for more destructive flare-ups. By Saturday night, protesters had blocked roads and an interstate near the restaurant, a Wendy’s, and apparently set it on fire, according to news reports, with police firing tear gas and flash grenades to try to disperse the crowd.

The authorities said the man, Rayshard Brooks, 27, had run from the police on Friday night after failing a sobriety test and grabbing a Taser from an officer during a struggle with him. Ms. Bottoms said that security footage appeared to show that Mr. Brooks had fired the Taser toward the officer, who was chasing him before he was killed, but that she did not consider that a justification for the shooting. 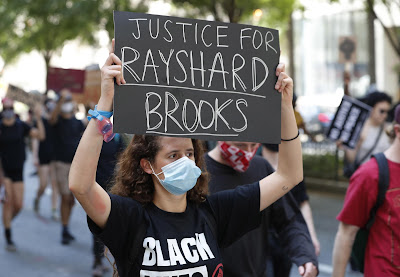 A comprehensive report of what happened says,just after 10:30 p.m. on Friday night, two Atlanta police officers responded to a complaint that a man, who we now know to have been 27-year-old Rayshard Brooks, was asleep in his car and apparently obstructing other vehicles in the parking lot of a Wendy’s restaurant on University Avenue in southwest Atlanta. According to the Georgia Bureau of Investigations, which is investigating the shooting and killing, the officers gave Brooks a sobriety test, which he allegedly failed. The GBI says that when the officers then went to arrest Brooks, he “resisted and a struggle ensued,” prompting one of the officers to deploy a taser. Brooks was able to obtain the taser before trying to run away, according to the GBI, and then “officers pursued Brooks on foot and during the chase, Brooks turned and pointed the Taser at the officer.  The officer fired his weapon, striking Brooks.”


Brooks was taken to the hospital, but died following surgery.
“While there may be debate as to whether this was an appropriate use of deadly force, I firmly believe that there is a clear distinction between what you can do and what you should do,” Ms. Bottoms said. “I do not believe that this was a justified use of deadly force.”
I personally cannot understand why you would shoot to kill a man who was running away from you,a cell phone video of the incident recorded by a bystander shows Brooks and the officers rolling on the ground before Brooks breaks free, stands up, and starts to run away. Gunshots can then be heard out of frame.He wasn't holding no hostage,he wasn't a danger to society.Is it a case of anyone who is black must be shot and killed no matter what the crime is?This is really shocking,especially at a time when the George Floyd killing is still generating such strong feelings not only in America ,but all over the world.
You can imagine police officers would have been briefed about this and told to be more light handed and sensitive in racial issues,yet this officer,Garrett Rolfe, still shot and killed Brooks,an African American over a nothing incident.The hatred must be so powerful for black people in America.
Tags america news racism usa
Previous Post Next Post